Joint Pain Ayurvedic Treatment in Ludhiana, Punjab, Joint disorders are becoming more common in youth, previously a largely old age issue. Many severe joint conditions, including Arthritis rheumatoid, osteoarthritis, Gout, Spondylosis, and osteoporosis, arise because the joints become imbalanced with Vata Dosha, Ama (toxins), or Asthi and Majja Dhatus. Sleshak Kapha lubricates the space between joints and when this reduces, rigidity and swelling arise along with discomfort and crepitus. In order to get the long-term recovery and successful outcomes for joint injuries, prompt therapies with Ayurveda are very necessary. 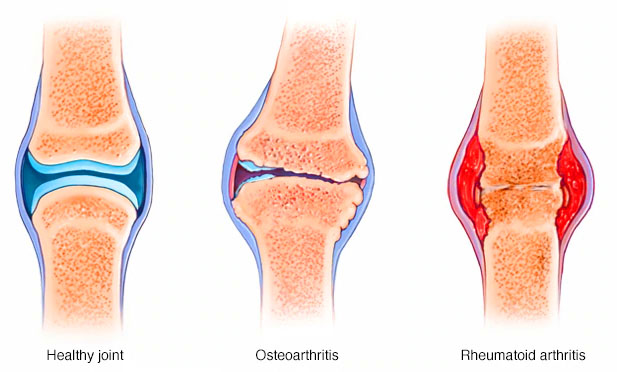 Certain joint problems are discussed below-:

Ankylosing Spondylitis has an effect on the spine. It is a recurrent inflammation that typically impacts young men’s sacroiliac joints. Periods of low back pain and firmness often radiate to buttocks or thighs, typically occur quickly. The symptoms are typically worse than cervical, and they occur early in the morning and subsequent inactivity.

Osteoarthritis, which impacts almost 20 million Indians annually, is the most prevalent form of arthritis. OA is often referred to as a degenerative joint condition of a back injury, hip discomfort, and inflammation. It usually experiences old age like after 45 years, but young arthritis is also increasingly anxious. Knee discomfort, shoulder irritation, and swelling in the thighs, elbows, ankles, lower back, and neck joints experienced more in the morning are the most frequent signs.

Cervical Spondylosis is a type of osteophytes backbone growth characterized by cervical vertebrae and pain at the back of the neck (radiating to the top) and vertigo when bending down. Sensory loss and engorgement in the upper extremities may occur.

Amavata is an auto-immune disease that contributes to chromium inflammation and severe pain in the joints. Rheumatic Arthritis is an auto-immune disease. The tissue around the joints, as well as other bodies in the body, such as the skin, kidneys, heart, and lung, may also cause inflammation. Autoimmune disorders are illnesses that develop because your own immune system targets the body’s tissues erroneously.

Gout is an inflammatory condition that is debilitating that induces swelling that uric acid accumulation in joint cartilages. Gout affects the large toe first, which makes it swell and get very painful. It spreads to the knees, arms, legs, bracket, and elbow in the next stages.

What is Ayurveda ‘s unique remedy for arthritis?

Other than pharmaceutical goods

To complete the effect of medicines and to sustain the benefit of therapy after the medicines, diet, home remedies, and lifestyle changes play an important role, apart from medicines. Thus, Ayurveda reflects similarly on the way you feed and work.

Ayurveda focuses on the root cause of this illness, due to which the possibility of severe health problems is reduced. The chance of health problems for patients who undergo Ayurveda therapy will later be that.