Autoimmune Disorder Ayurvedic Treatment In Ludhiana, Punjab, Auto Immunological disorders are caused by an inappropriate attack of the body’s natural defense mechanism (immunity). According to Ayurveda, this is done by smriti, the subconscious cellular memory. The human body can be conditioned by development to recognize and deal with external threats. The cells that become harmless as smriti gets misaligned. The focus of Ayurvedic Autoimmune Disorder Therapy is to restore balance and reinforce natural immunity. In addition to this, the ultimate issue is solved with a customized mix of treatments, medications, foods, and habits. 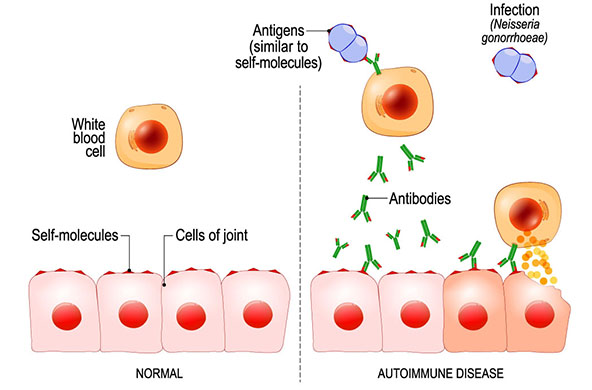 The idea that every person has a unique constitution is a prerequisite of Ayurveda. A growing individual should value food and lifestyles that suit them in order to preserve their optimum health. The technique is prevention, but therapeutic treatments (natural medicine, yoga, meditation, and relaxation exercises) are utilized while a person is ill.

Ayurveda categorizes people into three main constitutions such as Vata, pitta, and Kapha. All of these doshas are combined, but one or two typically dominate. When “Vata” is dominant, the individual has the same qualities as the wind: bright, cool, mobile, erratic, hot, rugged, imaginative, and fear-prone. When Pitta is dominant the individual becomes a fire and may have dry, strong, painful, angry, and inflammatory qualities. The individual is like an earth-water combination when “Kapha” is dominant. They may have stable, reliable, cool, calm, dense, slow, caring, and diabetes-prone and high blood glucose qualities.

Treatment for this condition includes different remedies and treatments for these autoimmune conditions. This is a natural therapy involving corporal detoxification, enhanced metabolism, and increased development of ojus, which are essential for Ayurveda autoimmune disorders.

Elimination of toxins : Ayurveda begins to work on the removal of toxins. The proper working of the immune system, which frequently results in autoimmune diseases, is disrupted by contaminants or Ama in the body, according to Ayurveda. Usual Ayurvedic drugs to detoxify the human body include Shunthi, haritaki, pippali, maricha, hingu and saindhav lavan.

Metabolism correction : Ayurveda not only detoxifies your body but also corrects your metabolism that becomes messy when you have an autoimmune disorder. In the ayurvedic treatment of autoimmune disorders, Neem, Guggulu, Guduchi, and vasa are also used as a patola Patra, and ghrita, to treat autoimmune diseases.

Increased production of ojus : Ojus is the component to feed the immune system. It is typically extracted from the food you consume. The development of Ojas declines to nearly zero because of defective immune systems that induce metabolism depletion. Ayurveda, therefore, improves its development. The production of Ojha is increased through the use of Guduchi, haridra, manjishtha, amalaki, nirgundi, yashtimadhu and pippali.